Le Pustra‘s Kabarett der Namenlosen, presented by Boheme Sauvage, is the most talked about show in Berlin right now. And rightly so!

Kabarett der Namenlosen had its debut earlier this year. It is now back for a second run at Ballhaus Berlin in Mitte, over 6 days.

The atmosphere is sizzling at Ballhaus: audience members dressed to the nines, press in fervour, people who travelled from other countries to come and watch the show. Guests enter a time capsule and are transported into a different world: a dark and smoky ballroom, where time has stood still. Fictional characters and audience are mixed, genders are bended, drinks are poured.

The show starts: ‘Leave your inhibitions at the door’ says creator and conferencier Le Pustra. Exactly that, you must do.

Kabarett der Namenlosen is a heady cocktail of Weimar nostalgia mixed with modern undertones, sex with a dash of irreverent comedy, beautiful song  stirred with the grotesque.

The audience is literally immersed for two hours in this debauched yet tender world, and gets intimate with its characters. By the end of the show, I found I got somehow attached to these individuals and their quirks. I asked myself ‘What will they do tomorrow, when they wake up in daylight? Who will they wake up with?’ I found something special in each and every performer, who get their highlight throughout the show.

I absolutely loved this show and cannot recommend it enough: the producers captured the essence of Weimar Berlin‘s underworld without over glamourising it.

If you haven’t seen the show already, go and watch it before it’s gone.

Here you can read our interview with Le Pustra from last year. 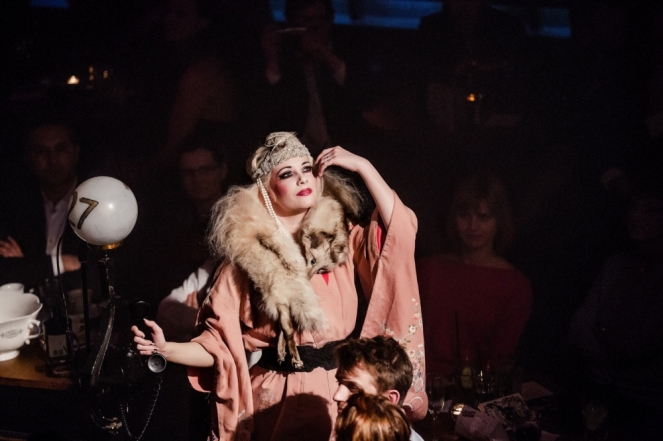 Published by Honey aka Federica

A vintage expert, blogger and showgirl, Federica also known as Honey is a retro fashionista living in Berlin. A former Londoner, she holds a degree in photography, loves to travel and write. She is followed everywhere by her rescue dog Lola. View all posts by Honey aka Federica

A hepcat in Berlin

an English language guide to eating gluten free in Berlin